You are here: Home / Bacterial and Fungal Diseases of Cannabis

Like every other plant, Cannabis is attacked by a wind range of diseases including fungi, bacteria, viruses, and nematodes. At least 88 species of fungi have been isolated from Cannabis and more are being discovered every year. 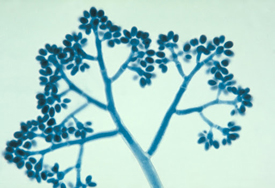 The most common and significant disease of Cannabis is grey mold or bud rot, caused by the fungus Botrytis cinerea. Botrytis cinerea attacks many crop plants and weed species worldwide. It thrives in high humidity and cool to moderate temperatures. Under these conditions gray mold can reach epidemic proportions and completely wipe out a Cannabis crop within a week. Botrytis can attack the Cannabis crop at any stage of growth.

Hemp canker is believed to be the second most important disease of Cannabis. The disease is caused by the fungus Sclerotinia sclerotiorum. Symptoms of hemp canker may appear as water-soaked lesions on stems and branches of plants nearing maturity. The lesions collapse into cankers and become darkly discolored. Affected areas take on a shredded appearance and the pith becomes filled with a white cottony mycelium. Plants remain in this condition or wilt and fall over.

Damping off Disease of Cannabis

Damping off fungi kill seeds in soil or seedlings shortly after they emerge from the soil. Fungi invade stems of seedlings at the soil line, causing a brown watery soft rot, then the plants topple over. damping off is a widespread problem, attacking all cultivars of Cannabis.

Pseudomonas aeruginosa is a bacterium that has been isolated from human beings and plants. It is an opportunistic pathogen that can infect the … END_OF_DOCUMENT_TOKEN_TO_BE_REPLACED

Escherichia coli (E. coli) is a type of coliform bacteria commonly present in the lower intestine of warm-blooded animals. It is therefore commonly … END_OF_DOCUMENT_TOKEN_TO_BE_REPLACED